Had CC8H and Anti-Vax Watch told the truth in our first propaganda report, we would have focused not on the Vaccine Truth and Health Advocates in our smear campaign to silence dissent, but on Pharma’s Dirtier Dozen and the dark truths and medical sorcery they have been pushing the past century to depopulate mankind and finish building the bridge to transhumanism for the one world governance architecture.

Pharma’s Dirtier Dozen are Responsible for 66.6% of Vaccine Propaganda 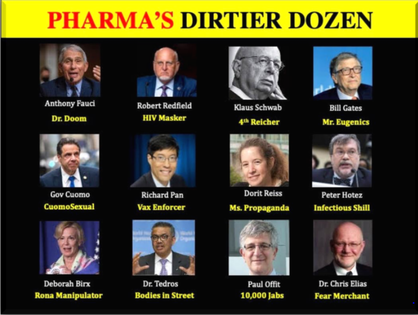 Covering up the truth and depopulation goals about Pharma’s Dirtier Dozen have been a Mt. Rushmore task for the Center for Censorship Eight Hate and Anti-Vax Watch group; we are up to the challenge. It’s the “last mile” of turning or silencing the remaining 33.4% of the “vaccine resisters” that make this a crucial journey into the abyss. Hiding the secret agendas and pharma coercion tactics about the Dirtier Dozen while labeling the Truth
Tellers as “heretical” and “nut jobs” become more difficult every day. Expect blowback.

Pharma’s Dirtier Dozen are comprised of banking oligarchs, medical sorcerers, and anti-human degenerates, with dark appetites lurking in the shadows.

​The Dirtier Dozen account for 95% of the social media censorship. At their direction and with Bill Gates’ wealth and control of the health sections at CNN, The Guardian, New York Times, Fox News and other media outlets, the gauntlet has been slammed down on the truth. Gates’ connections to Big Tech and Big Gov, show only 5 percent of vaccine facts leak
out to the public via the web and social media platforms.

​That’s still too much. The anti-vaxxer leaders pose a serious threat to Gates and Schwab’s Agenda 2030 eugenics program—aka ‘pogrom’—with the World Health Organization’s Dr. Tedros working with the CCP on further installing the surveillance state deep into American cities and urban centers. Big Corp is doing its part attacking the new “election integrity” laws, while we at CC8H hold the dam on demands for “vaccine safety” commissions, transparent trials and working vaccine injury databases.

CC8H doesn’t like the Jesuit, vaccine pope of darkness any more than the other Dirtier Dozen. Yet, we cannot have rotund Redfield go off the reservation and counter Fauci’s false narratives on the virus
being of natural origin (i.e., from an animal). Lab enhancement claims only will boomerang and lead back to Fauci, the WHO, CCP and the Gates Foundation for funding the Plandemic. Such truths, if they were to become public knowledge, would expose the creation of new multi-billion industries, such as PCR tests, swabs, temperature-guns, plastic barriers for social distancing and school children, the 1.2 billion masks made a month, vaccine vials,
billions of needles, and all the marketing literature and paid advertisements. 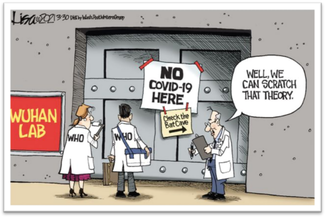 These issues are further exasperated, and as such will become entrenched, by Dr. Tedros countering our well-crafted narratives we created, in concert with the Chinese Communist Party, that the virus still, somehow, some way is “lab-modified.” Putting that truth out in the public domain, even in the mildest of terms or smallest kernels, can and will be used by the anti-vax crowd against us, creating friction in the CON-fidence game we game to continue to blind the masses to comply, wear masks, and take lethal COVID-19 vaccines.